I
Appearing in Europe in the sixteenth and seventeenth centuries, "cabinets of curiosities" (also known as "wonder rooms") were displays of heterogeneous collections ranging from extraordinary objects, exotic natural specimens and rare scientific instruments to antiques and works of art. The undeniable interest aroused by the body of knowledge they contained, with their abundance and diversity, made these rooms fascinating spaces. The growing hybrid selections contained in them were exhibited without the methodology that we know today. As objects became part of a collection and were gradually incorporated into the cabinet of curiosities, every corner of the chamber or room -including entire walls and ceilings- was filled with the most varied elements. Individual display cabinets, closets and tables were usually added to the space to feature smaller or particularly relevant pieces.
The term "immersion" as "the state of being deeply engaged or involved in something" serves as an adequate notion to describe what cabinets of curiosities offered spectators. Their cluttered and surrounding spaces facilitated this experience, where the human body through its perceptions conveyed wondrous relish and cognitive reflection. Conceived as settings for an encounter with diversity and otherness, the cabinets’ presentations of the "rare, exotic, beautiful and valuable" enabled a fulfilling encounter--comparable with that of traveling--in which reason, emotion and sensorial perception were intensely experienced.

"Abstract Cabinet. Patricia Van Dalen & Emilio Narciso. Duo Project" began with the artists’ review of cabinets of curiosities as exhibition spaces with a continued relevance today. The heterogeneous, accumulative and variable character of the cabinet and its complete takeover of the space as a form of display provided Van Dalen and Narciso with a fertile ground for research and imagination. This drove the artists to undertake their processes of creation in counterpoint, not only in terms of the necessary dialogue with each other to create the works exhibited here, but also through the creative integration of their outcomes into the spaces of Imago Art in Action, where the groups of works created are displayed in a geometric mural of balanced constellations.
In this sense, the limits of Abstract Cabinet fall into the installational and procedural while serving to register the artists’ studies on the aesthetic views of Russian avant-garde El Lissitzky (1890-1941), who believed art was a thorough experience, "expansive and in constant combustion". Pursuing the integrating notion of "immersion" proposed by cabinets of curiosities, in the 1920s Lissitzky developed in Germany the notion of "cabinets of abstraction", comprised of chambers where he installed his constructivist works, seeking to involve the viewer with the surrounding environment created by concrete forms, arranged to merely consider the balance of its elements in space. The purpose of these spaces was to "kindle an experience both emotionally and intellectually" that would modify the traditional constraints on art perception and welcome the concept of modern aesthetics.


II
From perspectives that reveal related yet independent concerns, the works of Patricia Van Dalen (Maracaibo, 1955) and Emilio Narciso (Carúpano, 1974) have been revising the languages of abstraction through the narratives of contemporary art.
Patricia Van Dalen is a Venezuelan artist with an extensive and recognized career. Now based in Miami, her ongoing research is born from the interest to unravel the dynamics inherent in the intrinsic plasticity of visual media. For many years, Van Dalen’s study of color was recognized as the backbone of her creative practice. Recently, her findings have shaped some of her reflections on the connections that the geometric grammar of color has with the form, the line and the internal frameworks of the plane. The work that Van Dalen includes in Abstract Cabinet could be defined as a poetics of structures. The proposal intertwines lines of creation that address her artistic trajectory, in an exercise of insistent questioning about the elements that have been structural to her aesthetic language. This formal review is sustained in a space accommodating a subjectivity deeply committed to the creative process and to the fact of being an artist; manifesting in an attempt to dismantle the functions that the expressive elements update in the artist’s language, and through experimentation with new materials and surfaces that contribute to the vocabulary of this dislocation. In her series Grilla and Dessin, Van Dalen extracts the color planes until reaching the constructive foundations of the line, taking drawing to lingering limits. The pieces from the Automatique series, on the other hand, constitute metaphorical body structures, drawings without lines, emerged as a way to give concreteness to the void and to sustain this ambivalence through the figurative suppression of its boundaries, given by the straight cuts in anodized aluminum.


Emilio Narciso is a Venezuelan artist based in Caracas. His work looks into the role of geometric abstraction as a fertile meeting point for diverse narratives. In this practice, Narciso reveals his study of the work by Gego and various artists from the neo-concrete movement in Brazil, recognized for distancing themselves from the "cold" mainstream of geometrism- as well as the proposals by contemporary Venezuelan artists such as Eugenio Espinoza and Héctor Fuenmayor, who take on their geometric filiation from a critical perspective.
In Abstract Cabinet, Narciso includes pieces that appropriate elements from the geometric grammar. One of its fundamentals, the grid, serves as an expressive module that has allowed the artist throughout his career to develop proposals that concern the formal-perceptual plane and foster narratives of a conceptual nature. In his series Concrete-empty pictorial system, the artist utilizes incision-squared spaces on painted canvases that overlay and hang. The intersection of orthogonal lines and empty spaces given by the overlapping of the canvases creates a visual dynamic allowing the meanings of the words “concrete” and “empty” acquired in different lexical modes to meet and intercept. The pieces refer to the pictorial tradition as a field of representative concretion and of the abstract-concrete that is constantly undermined by questions on its exhaustive value. In the series Photographic reality as an exercise of concretion, Narciso uses the screen as a support for a fragmentary image that refers to the weavings of Gego in its formulation. It is, in fact, a visual weaving as well as a weaving of meanings, where segments of a photograph and geometric design are intersected, signaling the artist’s research for the last years on the two great Venezuelan artistic traditions: landscape and abstraction.


III
During the mid-twentieth century, geometric abstraction was assumed in Venezuela as a program that embraced the longings of modernization of a still provincial nation. Years later, the oil bonanza spurred this "modern mirage", incorporating ideals of progress that did not fully correlate with the social, political and economic structures of the nation. This process was accompanied by the country’s enthronement of geometric art and, above all, of kineticism, as the official aesthetics of the oil era, exhibited on a monumental scale.
The presentation of the project Abstract Cabinet in Miami could well assist to reassess the questions raised by the post-utopian and confusing framework of Venezuelan contemporaneity. The recontextualization this installation proposes of the immersive model of the cabinets, opens a symbolic field that makes possible the reception of the multiple and the hybrid- translated in a creative group with plastic formulations accepting the contingent- as a locus from which it is possible to recognize the hidden dynamics that limit and shape transformation. 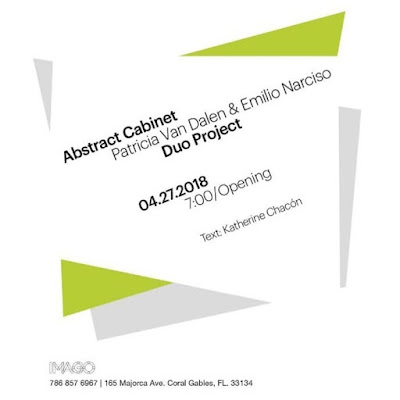 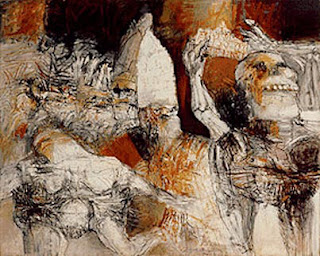